Who would have thunk that water could be so unforgiving?  We had another great Sunday on the boat with some friends.  Thankfully the sun stayed out most of the day because it got a tid bit chilly when it was hiding behind the clouds.

Since I haven't been brave enough to try wakeboarding yet, my fun on the boat includes tubing (with a strict warning of "It's okay to whip me around, but no WAVES").  It was my first run of the day and Ben was doing a great job of following my instructions.  We hit a few waves because it was so busy, but no purposely made tsunami type waves.  A couple of the "whip-outs" were pretty intense, but my mighty strength kept me on the tube until one whip-out had me what seemed to be straight out on the side of the boat (far enough that I was out of view from the video camera).  When I could hold on no longer, it felt like I did about three flips and skidded across the water with a smack.  I managed to some how plug my nose during these acrobatics but when I came to the surface of the water, I was in so much pain (and in the weeds....grrrr).  I temporarily couldn't move my leg and could barely get back in the boat.  Here is the result.... 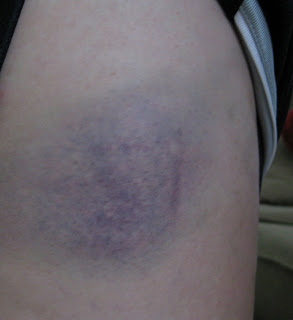 This bruise is on the back of my leg and is about 4-5 inches across and still really swollen.  OUCH!

Is it weird that I'm glad that I bruised like this so people didn't think I was being a wuss?  By the way, Ben feels terrible that I got so hurt, but I keep reassuring him that it's not his fault.
Posted by Ruley at Tuesday, August 23, 2011