5 Reason that I Love Weight Watchers

Since I’m about to give my life story on my struggles with weight, I wanted to start with the five reasons so that you can choose or choose not to read on…
1 – There are no food restrictions.  You can eat whatever you want whenever you want it unlike other fad diets that say you can only eat certain foods and they can only be eaten at certain meals.  Yuck…who can sustain those diets?
2 – Points can be earned by doing activity (for those that don’t know, all food has a point value and you get a certain number of points to eat everyday).  The points that are earned can be used at anytime through the week.  They don’t have to be used that day.
3 – There are additional weekly points that can be used any time during the week to be used to eat/drink the things you enjoy.  I usually use these for cocktails.
4 – Weekly weigh-ins to keep me accountable.
5 – Weekly meetings to share ideas, successes, and obstacles with other people going through the same struggles.
I have been slightly overweight my entire life.  At each period of my life I thought I was fat at the time, but as the years passed and I continued to gain weight I would see old pictures or remember the size I used to be and think ‘wow, I can’t believe I thought I was fat…I’d do anything to be that size again.”
I started and stopped and restarted a diet so many times that I can’t even count.  I’d lose a few pounds, but the diets were never sustainable.  In the beginning it’s easy to be gung-ho because you’re motivated, but we soon get bored of eating healthy and quickly jump back into our old habits.  There never seemed to be a happy medium.
It must have been about six years ago that I tried Weight Watchers for the first time.  I LOVED it.  I was eating healthier, but I still had the option to eat the food that I loved like pizza, chips and fried foods…I just had to plan for them.  I had amazing success on the program in a short time period.  If my memory serves me correct, I lost 25 pounds in less than three months.  Then one weekend I had an awful weekend with eating bad foods…really bad foods.  The problem wasn’t that I ate the bad foods, it was that I still actually lost weight at my next weigh-in.  You’re thinking “why is that a problem?”  Well, the problem is that I thought “this is great, I can eat terribly and still lose weight.”  So I continued to eat my old ‘bad’ foods.  My new metabolism kept up with me for a short week or two, but it soon caught up with me and the weight began to come back.  I felt defeated and quit Weight Watchers all together.  So although the program worked and worked well for me, I did not have the right attitude.  I wasn’t viewing it as a lifestyle change.  It was a quick way for me to lose some weight so I could go back to eating the foods I loved…all the time.
About two years went by and I decided I had had enough of the weight gain and tried Weight Watchers again.  This time they were offering a special that you could pay ahead for like 16 weeks to get a discounted rate.  I chose this option, but it was a terrible idea for me.  In those days if you missed a week you still had to pay for that week’s weigh-in.  However being that I paid ahead, I never felt like I was losing money if I skipped a week since I had already paid for all of the weeks.  Honestly, I think I probably only went to the first two weeks of the entire 16 weeks because I didn’t feel accountable to go.  Needless to say, I didn’t lose any weight.
Three more years and four miscarriages later, I became completely fed up with all of the weight that I had gained (by this time I was way more than slightly overweight).  The doctors haven’t found a single thing wrong with me that would cause a miscarriage, so my only thought is that it has to be the excess weight.  I knew Weight Watchers had worked for me the first time, so I didn’t have any hesitation in rejoining.
I joined for the third time mid-September of 2010 and I haven’t looked back.  In the almost eight months on the program I have lost 55 pounds.  There has only been two weeks that I gained weight at weigh-in and they were the last two weeks with a .2 and .4 pound gain (which is like nothing).   This time it IS a lifestyle change for me.  I am by no means always eating healthy.  In my opinion, you have to allow yourself the food you love on occasion and in portion controlled quantities or you will never be able to maintain your new weight (unless you just don’t care about food, but I find that hard to believe or you wouldn’t be trying to lose weight in the first place).
I am so thankful that my mind is finally in the right place to succeed at losing weight and Weight Watchers has been just the right tool to help me do so.
Posted by Ruley at Monday, May 09, 2011 3 comments:

I haven't been the greatest at keeping up with my blog posts, so I am going to follow suit with my bff Andrea and try "Tail Wagging Tuesday with C Mae."

Every week, C Mae provides a topic to write about your pets (she has a dog, so hopefully the topics will always work with my cats).  At the end of her post you can link up your Tail Wagging post for other bloggers to read.

With my cats, River and Percy, it's more about the tones in the meow that lets me know what they are saying, but I can at least play along with this one.

Since this is my first post about my cats, I should probably give you a quick background which is going to make this post really long...

Prior to 2005 I HATED cats.  When I moved in with my husband Ben (boyfriend at the time) one of his roommates wanted a cat and Ben reluctantly agreed.  Drake was AWESOME and I was completely heartbroken when Drake had to leave with his owner two years later.  Apparently I had never been in the presence of any "good" cats prior to Drake...hence my hate for cats.

When Ben and I returned from our honeymoon in January of 2007 we knew we had to get a new furry friend.  We went to the local humane society and purchased not one, but two cats (because they came together and it was a buy one get one deal).  I don't know why we bought Sully and River (formerly Beau Beau and Princess who were two and a half years old) because they were absolutely terrified when we were holding them and they wanted NOTHING to do with us.  They turned out to be the most amazing pets, both with their own unique personalities.

River (the girl) became totally attached to me and NEVER leaves my side.  Sully (the boy) became Ben's cat.  Last October Sully died suddenly with zero warning signs to us.  The vet assumes he had an enlarged heart.  Ben and I were devastated and River became depressed (seriously, it was awful the sounds she would make).  We had to get another friend for her (and us too) so we made another trip to the humane society a month later and purchased a three month old kitten "Ted" which we changed to Percy.

Percry has been fabulous too, so we have come to the conclusion that a cat's personality is all about the owners and how much time and attention they devote to the cat.  It took River a couple of days to adjust to Percy, but they now love each other (for the most part). Percy is still a kitten so River doesn't always appreciate him jumping on her back to chew on her neck!

This is the "Are you really going to make me come inside?" look from River 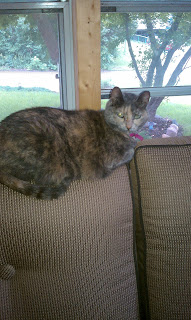 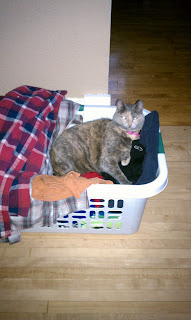 This is "﻿Are you ready to play?" from Percy 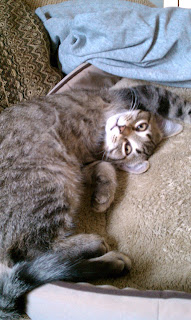 This is "Maybe Percy won't find me in here" 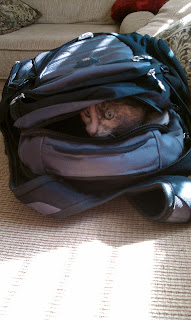 This is "Daddy farted again" from Percy 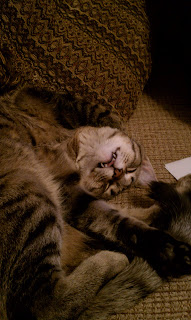 ﻿This is "PLEASE...not another picture" from River 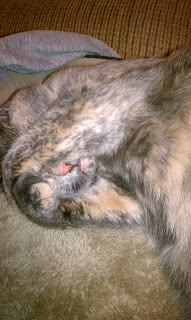 Finally, these are the "I love my mom" looks from River and Percy 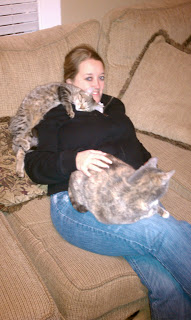 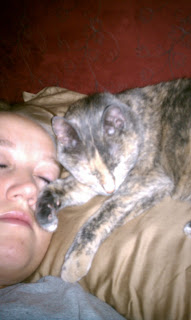